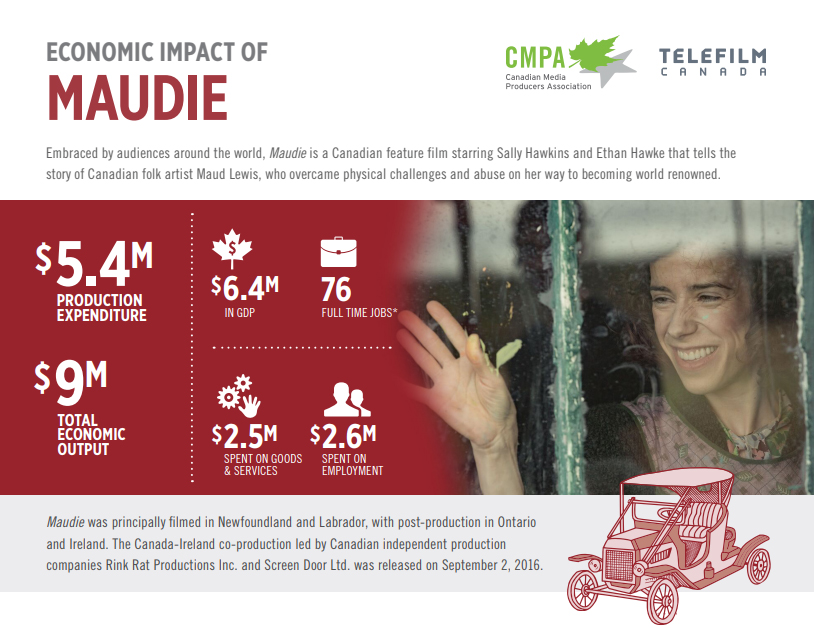 OTTAWA, March 9, 2018—A new CMPA study, released in advance of the Canadian Screen Awards, illustrates the remarkable economic activity generated by the production of the feature film Maudie. The Canadian/Irish co-production starring Sally Hawkins and Ethan Hawke generated $6.4 million in GDP, drove $9 million in total economic output, and contracted services from nearly 300 businesses across Canada. A summary of the study’s findings is available here.

Maudie, which tells the story of Canadian folk artist Maud Lewis, was principally filmed in Newfoundland and Labrador, with post-production work completed in Ontario and Ireland. The film has been nominated for seven Canadian Screen Awards, including Best Motion Picture, Director, Screenplay, Actress and Supporting Actor. It also won a number of awards at the Irish Film and Television Awards earlier this year.

“Just like Maud Lewis and her artwork, this film reflects the rich character of the subject matter and the talent of the local community where it was created,” said Mary Sexton of the St. John’s-based Rink Rat Productions, which co-produced the film along with Screen Door and Parallel Films. “Maud’s story, and the incredible recognition it has received, really shows what is possible when we bring Canadian stories to the screen.”

“In addition to the cultural impact that a film like Maudie makes on Canadian society, our creative industries contribute significantly to the economy, both locally and nationally, through employment- and production-related spending,” said Carolle Brabant, Executive Director of Telefilm Canada. “Our country’s cultural agencies, such as Telefilm, along with provincial support from such organizations as the Ontario Media Development Corporation and Newfoundland and Labrador Film Development Corporation, play a vital role in ensuring that this independent film production continues to be possible.”

Economic analysis for this study was carried out by MNP LLP for the CMPA with financial support from Telefilm Canada. The full study is available here.